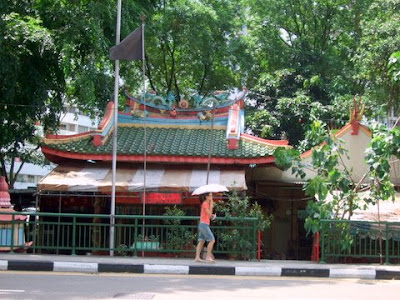 This is one of the few temples dedicated to Sam Tiong Ong 三忠王 (San Zhong Wang), deities from the late Song Dynasty, Wen Tian-Xiang 文天祥, Lu Xiu-Fu 陆秀夫 and Zhang Shi-Jie 张世杰. This temple, located at Zion Road, is standing on a piece of land that has been en-bloc for redevelopment. This temple has been here for at least more than 70 years, witnessing the changing tributary of the Singapore River - when the descendants of the great tongkang builders from China continued their tradition for the busy Singapore River further downstream, the big Bukit Ho Swee fire, of which it stood while the surrounding attap houses burnt down, and how the "phoenix" rose from the fire in the forms of HDB flats, and it itself now might not survive the demolition ball. 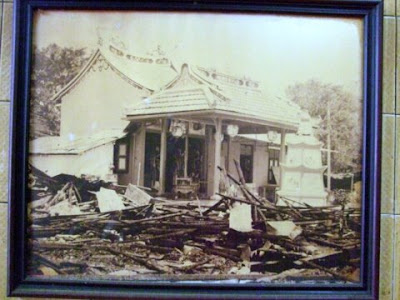 Inside this temple, there was a framed picture dedicated by the Lu Clan Association, showing a statue of Lu Xiu-Fu, with a brief history of the three matyrs of the Song Dynasty. I reproduce it here for better understanding:
Wen Tian-xiang, Lu Xiu-fu, and Zhang Shi-jie were the three patriotic officials of the late Song 宋Dynasty period. In 1275 A.D., the Yuan 元 army came south to invade China. The three of them organised more than 10,000 volunteers in the capital city of Southern Song 南宋, Lin-an  临安(present Hang-zhou 杭州, to fight the enemy. In 1276 A.D., Wen Tian-xiang was appointed the Chief Minister in charge of the non-military affairs, and Lu Xiu-fu the Chief Minister in charge of military affairs. Later, when the capital city was occupied by the Yuan army, they led the troops, retreating to coastal provinces including Zhe-jiang 浙江, Fu-jian 福建 and Guang-dong 广东.
They continued the struggle with the Yuan army proclaiming Zhao-shi 赵是 and Zhao-bing 赵昺as successful emperors. In 1278 A.D., Wen Tian-xiang was captured after this troops were defeated. In prison, he wrote the famous Zheng-qi song 正气歌 to express his sense of patriotism and loyalty, resisting the threats and briberies of the Yuan regime. In 1283 A.D., he died in prison heroically. In 1279 A.D., Lu Xiu-fu and Zhang Shi-jie escaped to Ya-san 崖山 in Guang-dong province, together with the young emperor Zhao-bing. The Yuan troops were hot on their heels. The situation was made worse by a typhoon. Zhang Shi-jie attempted a break-through with his troops. His ship capsized and he was drowned. Lu Xiu-fu realised that the situation had become hopeless. Carry emperor Zhao-bin on his back, he and his wife ended their lives by jumping into the sea. Later, the people admired the patriotism of these three great officials and worshipped them as the three patriotic lords of the Song Dynasty. 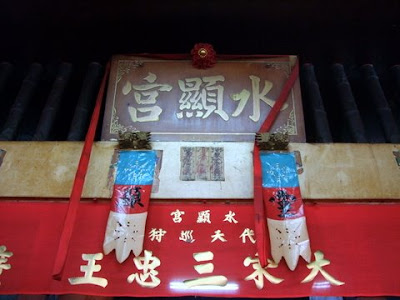 This temple carries with it its stories, most of which would be lost because all are orally transmitted down the generations. I was told that this temple was a result of an exchange of two temples between San Zhong Wang and Guang Ze Zun Wang. As it turned out Guang Ze Zun Wang's temple further down the river was burnt down and this temple was most of the time indunated with flooding water, especially during the extreme high tide. Could well be a myth. 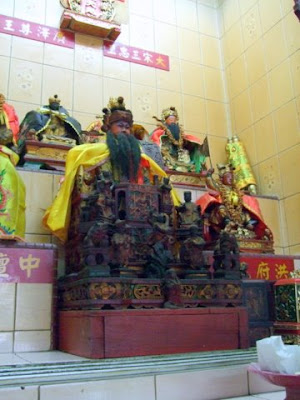 It was almost like a temple as a stranger in its own surrounding as the residents moved to various parts of Singapore. But each year, during its festive days (9M16), the loyal devotees remember and would return to pay respects to their three patriotic lords, a constant reminder of what they should be.
Links
Sam Tiong Ong temple in Malaysia
Posted by chinatownboy at 5/31/2009 05:29:00 PM

hi, I think there is another temple tat is associated with the Zion Rd temple which is forgotten by many. A very interesting event i must say. There are orginally 3 temples situated at tis present place tat form a triangle . tat wat i heard

HI,you are right , there actually a triangle build up by these 3 temples, but the other two still in good condition and prayers still willing and attend for worship their Heavenly Gods, only this temple is down, caz of the Medium