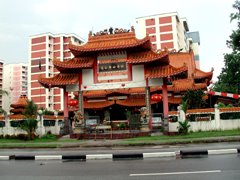 In this report, I shall just focus on Tian Gong Tan Zhao Ling Gong. 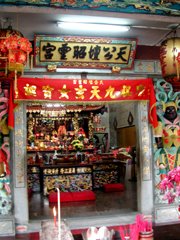 Tian Gong Tan Zhao Ling Gong Temple"Tian Gong Tan" was a wooden temple erected [in 1917] by the villagers for the worship of "Tian Gong 天公" and "Qian Shou Guan Yin 千手观音" as well as celebrating "The Hungry Ghosts Festival 中元节" in the 7th Lunar month. it was located at Clementi Park along Sunset Grove.

"Zhao Ling Gong" worships the "Jiu Tian Xuan Nu 九天玄女" and "Zhu, Xing, Li Da Ren 朱,邢,李大人". It was migrated to Singapore from China, Fujian, Anxi province [Gong De Li 公得里(Neighbourhood) Ma Tou Xiang 马头乡(Village) with Mr. Koh 许 (Xu) in the 1930's. After several settlements, it was last settled in Clementi Park. Mr. Koh performed as the Medium and the prayers was carried out in his house. The villagers believed the Holy spirits of "Jiu Tian Xuan Nv" because they will have a peace of mind after the prayers. In order to have a more convenient and comfortable place of worship, the villagers and Mr. Koh came to a concensus in 1943 that the deities of "Zhao Ling Gong" joined "Tian Gong Tan". [In 1975, they started the first management committee, celebrating the Tian Gong's birthday on the 9th of 1st lunar month, celebrating the birthday of Jiu Tian Xuan Nv on 15th of 4th lunar month and the Hungry Ghost Festival on 1st of the 7th lunar month.]

In 1983, the temple site was affected by resettlement and was ordered to move by the Authorities. The villagers and enthusiastic believers formed a Preparatory Committee in 1988 with the name of "Zhao Ling Gong" to raise funds and activities were carried out for about five years to raise the funds needed. 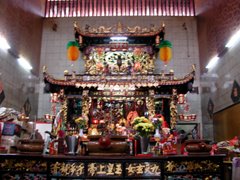 On 28 Feb 1992, the Preparatory Committee jointly bought a piece of land from HDB Land Office, with Shan Leng Temple and West Coast Hock Teck Si, which is located at Jurong West St 41 (current location), 1800 m2 in area for a term of a 30 year lease. The construction of the new Temple commenced on 14 Mar 1993 and was completed after two years.

In 1993, with the name of "Tian Gong Tan Zhao Ling Gong" Temple, the committee applied for registration as a legal society. The application was approved in 1994.