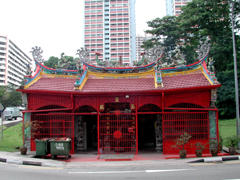 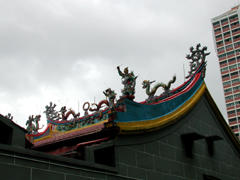 Emperor. On the eve of the 9th day of the Chinese Lunar New Year (1st Lunar Month) - the birthday of the Jade Emperor, this temple is one place where many Taoist devotees would come to pay their respects.
Posted by chinatownboy at 10/23/2005 10:10:00 PM 2 comments: Links to this post 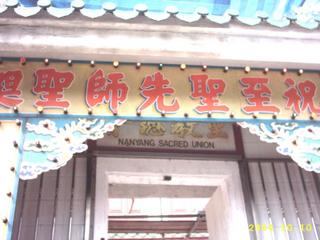 This is not a typical temple set-up found in most temples in Singapore where a devotee or any member of the public can walk in freely to pay homage. Instead, one has to be a member to be admitted into this “Sacred Union”. But on festive occasions such as the birthday of its patron saint, Confucius, one can see members of the public being welcomed into the temple premises.

The Union can trace its history to the 1930s when a group of immigrants from Foochow district in China pooled their resources to purchase a place to perform religious rites. That was how this building in River Valley Road came into their possession. There are actually 3 buildings in the Union - no. 251 for the worship of Goddess of Mercy; no. 253 – the central and main building - for Confucius; and no. 255 for Lao Tse. 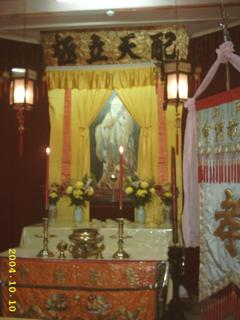 Confucius is known, amongst other epithets, as the "uncrowned emperor of China" and the "throneless king" because of the vast impact of his teachings. The phoenix, which is a Chinese symbol of immortality and benevolence, is closely associated with him. The bird is reputed to have been sighted, along with the kirin (unicorn), at the time of Confucius' birth. It is believed that such auspicious sightings take place only before the birth of benevolent kings and sages. Lao Tse, founder of Taoism, associated Confucius with the phoenix because of the latter's teachings which emphasises benevolence and virtue. Legend has it that the phoenix carries sacred scrolls and/or holy books in its bill. For these reasons, Confucius is deeply revered by members of the Nanyang Sacred Union.

Union membership is exclusive. To be a member, the prospective candidate not only has to be recommended by an existing member, but must also seek sanction from Confucius by picking either a “yes” or a “no” slip of paper tossed before the deity. A “yes” would of course signify acceptance. It was said that one devoted fellow got in only on the 8th try!

The Union currently has 1,500 members, male and female, from all walks of life. Membership has its privileges - apart from being able to network among like-minded individuals, members can secure a place for their ancestral tablets directly behind the statue of Confucius, the paragon of filial piety. 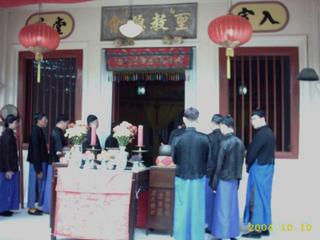 The main event held every year in the temple is the religious ceremony performed to honour Confucius on his birthday. This usually falls in October. The ceremony is conducted in the Foochow dialect. Majority of the participants - about a dozen – tend to be elderly men, 60 years and above. All participants would wear a black cap on their head and a black tunic over a long blue shirt that touches the ankles. The ceremony involves a lot of bowing and praying, first to the Jade Emperor and then to Confucius.

Even the placing of offerings on Confucius’ altar has to be painstakingly carried out. Again this entails a lot of bowing to each other as the offerings are handed by one men to the next, on cue. 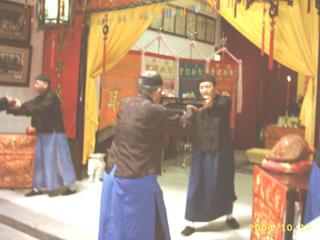 When all are placed properly on the altar, the men will then recite in unison by referring to the Chinese text held in front of them. All in, the ceremony will last an hour-and-a-half. The attention to detail and the meticulously-orchestrated movements all bear testimony to Confucius’ emphasis on orderliness and proper conduct which one can well appreciate given that Confucius lived during the turbulent period of the Warring States. There are about ten such Unions spread all over Malaysia - the headquarters being this one in Singapore. 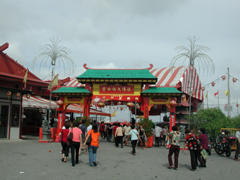 More popularly known by its Hokkien name, this is the Loyang Da Bo Gong. Situated at a remote beach off Loyang Way, this temple had a very humble beginning. It was said that someone found some statues washed to the shore and he decided to make a small shrine for it. There was also statues of the Hindu God. As time passed by, the number of devotees to this shrine grew. And so the little shrine became a bigger temple. Soon, devotees from across the causeway also came to pray in this temple.

This temple is unique in that in this complex, there is the Tua 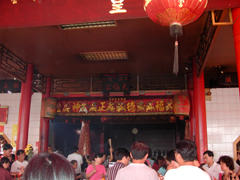 Pek Kong Temple (with other Deities as well) and a Natoh Kong, and a Hindu Temple, where Ganesha is one of the main Deities. The three temples within the complex had a harmonious setup. Most devotees coming to this temple would pay their respects to all the Deities in the three temples.

It has become one of the focal points for visiting mediums from other temples when they have celebrations and have "yew keng" (Procession).

This temple complex has to give way to development and it 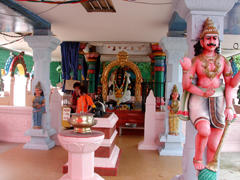 is raising funds to build a new and grander building. All the three temples will be continued to be housed in the new complex. The view of the sea and the current ambience might be changed forever. 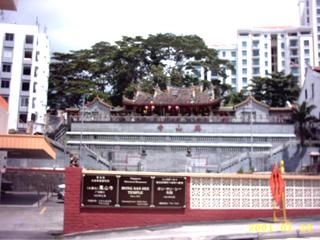 The Hong San Si at Mohamed Sultan Road was built by Chinese settlers from Lam Ann/Nam-wa (in Minnan hua; Nan-an in Mandarin) county in Fujian province, China. It is to honour Siong Ong Kong aka Kong Teck Choon Ong or Guang Ze Zun Wang in Mandarin, the God of Filial Piety, also known as God of Fortune. This patron saint of the Nan-an people was recorded to have lived during the later Tang dynasty (c AD 923) and was believed to have sold himself to slavery to pay for the upkeep of his parents’ graves. His birthday is celebrated on the 22nd day of the 2nd lunar month.

In the past, whenever the people of Nan-an arrived in a new territory, be it Singapore, Penang or Brunei, they would pray at the Hong San Si to thank the patron saint for their safe arrival. In fact, majority of the temples built by the Nan-an people tend to be identical in design as well as bear the same name, Hong San Si which translates into English as Phoenix Hill temple. Usually the temple would be sited on a hill overlooking a river or sea – elements said to constitute favourable “fengshui”.

Located on a hill, this Mohamed Sultan Road temple is believed to be one of the earliest temples erected in Singapore. Its view of the Singapore River is now somewhat obscured by skyscrapers dotting the scene. Completed in 1836, and later rebuilt at a cost of S$56,000 (a princely sum then) between 1908 and 1912, this temple features some exquisite design elements such as gilded wood carvings on its beams, calligraphy and dragon motifs on its columns and pillars. Images of the 8 immortals of Taoism are etched on the ceiling of the altar hall. The temple was gazetted as a national monument on 10 November 1978.

An apocryphal story has it that all Hong San Si temples defy full completion. Somehow or other, one part of the temple, usually the roof, would leak on rainy days. This was taken to signify the displeasure of the patron saint’s father-in-law who was touted to be a malevolent magician who disliked his son-in-law.

The Nan-an association in Singapore shares the same premises as the temple. The association currently has about 1,500 members. Any Nan-an descendant below the age of 45 who wishes to be a member pay a one-time subscription fee of S$110; those above 45, pay S$150.

There are several other Hong San Si temples in Singapore, one of which is located at 17 Lorong Melayu, Off Changi Road (tel: 6742 4318) – this one is officially known as the Hong San Si Temple Society (registration date: 14 February 1984). Another, the Hong San Gong is located at Airport Road while the Hong San Tan is at Woodlands Industrial Estate 4. 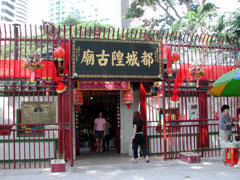 Situated at the bend of Peck Seah St, this 100 year old temple has seen much changes in its surroundings. The old pre-war houses had been torn down, and so were its neighbouring houses. Now it is nested between two growing giant sky scrapers.

Some hundred years ago, a Buddhist monk, Rui Yu founded this temple with the City God (Cheng Huang), Kisitigarbha Boddhisattva, and Avalokitesvra as the main deity. From the plaque placed outside the temple, were the following notes:

The temple was founded by Reverend Swee Oi from China. The Reverend whose family name was Huang, was educated and well versed in poetry. He 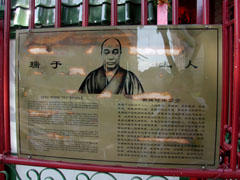 was an imperial scholar during the Qing dynasty. However his keen interest in Buddhism led to his decision to become a monk. He was ordained in Fuzhou Quanzhou.

The temple worships the City God. According to Chinese beliefs, the City God guards the city from evil. Devotees come to the temple to pray for the country's peace and prosperity, for the triumph over evil and for the good health of all. The City God rewards good deeds and punishes the evil ones. He also has the responsibility to guide souls of the dead to the underworld. His temple has been and continues to be a place of solace for its many devotees.
Posted by chinatownboy at 10/06/2005 10:12:00 PM 6 comments: Links to this post