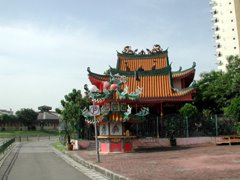 By the side of the Kallang River is a temple, known in Hokkien as Chwee Kang Beo, or Shui Jiang Miao in Mandarin, 水江庙.

The celebrations for Shi Shi Qi Wang Ye and Shi Shi Cheng Huang Gong is on the 28th of 5th Lunar Month. For San Jiang Da Shan Gong and Da Bo Gong, it is 15th of 11th Lunar Month. 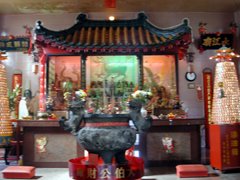 In the temple, there was also the Horse General at the side of the main building. Next to the Tiger God's cave is a boat.

From a report in the Shin Ming Daily, 4 July 2005, Monday (Page 7), there was an interesting story from this temple, from which I did a rough translation:

The main Deity of Shui Jiang Miao (Chwee Kang Beo in Hokkien) is Da Pu Gong 大普公. The Shi Shi Sheng Huang is also equally famous and has been in the temple for the past 40 years.

Every year, on the 27th to 29th of 5th Lunar Month, the Shui Jiang Miao celebrates in honour of Shi Shi Sheng Huang Gong and Qi Wang Ye.

The Qi Wang Ye are good assistants to the Sheng Huang. In the Sui Jiang Miao, only the Qi Wang Ye could be consulted through the medium. For the rest of the gods, they communicate through the sedan chair.

The story of the Stone Lion Sheng Huang in Shui Jiang Miao goes like this. In 1965, a old worshipper went to Stone Lion (Shi Shi 石狮), Quan Zhou 泉州, Fujian 福建, brought back a statue of Cheng Huang and wanted to have it consecrated (kai-guang 开光) before bringing home. When the medium was about to kai-guang, the Sheng Huang (appeared in the medium) wanted to remain in the Shui Jiang Miao. So, the worshipper left the statue in the temple. That's how the Stone Lion Cheng Huang stayed in the temple. As the Sheng Huang was originally a water-ghost, he probably would like to stay in this temple which is by the waters.

Wearing the Yellow Robe, the Water-ghost becomes the City God

Legend has it that once there was a water-ghost looking for a body to take over so that he could be reincarnated. He found a person with good features, but upon checking on his future, he found that this person had a very good fortune. He would become a uncorrupted official. He decided not to take over his body but to live in his body. He followed him and took care of him.


Interesting note:
I was told that the Cantonese has this phrase to illustrate a person who tries to be someone big: Shui Gui Sheng Cheng Huang (水鬼升城隍）Shui Kuai Sing Seng Wong (Cantonese). Anyone heard of this? (^^) 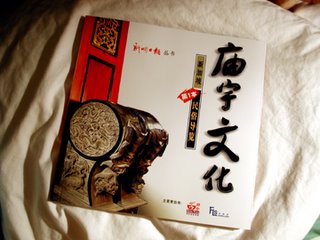 On 8 Dec 2005, Shin Min Daily, a local Chinese Newspaper in Singapore launched its first book on Chinese Temples in Singapore, Miao Yu Wen Hua 庙宇文化. This book covers some 38 temples in Singapore. The book is available in most bookshops and newspaper stands at S$5 each.

This book, written in Chinese, gives the readers a glimpse of the Chinese temples in Singapore and their history. A couple of the reported temples are already more than a hundred years old.
Posted by chinatownboy at 12/13/2005 04:03:00 PM 2 comments: