Poh Tiong Beo 普忠庙, currently located at Lorong 6, Toa Payoh (near to the Kim Keat Link and Shuang Lin Si), has a long history in Singapore. Tracing to its origin, it is said to have started as a shrine in a coolie-keng (coolie den) at 8 Nanking St in the 1930s. It could be earlier. Research is still being done to trace its origin. In the front part of the second storey of 8 Nanking St was the altar of San Zhong Wang 三忠王 (Sam Tiong Ong in Hokkien). It was known as Poh Tiong Dian 普忠殿 (Pu Zhong Dian). Most of the coolies and members of this shrine/sintua came from Dang Wua 同安 (Tong An), now within the precinct of Xiamen , Fujian, China. 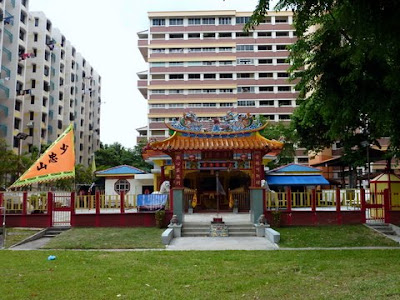 In the 1960s, a group of the members of this sintua, who have become businessmen, foresaw the need to build another temple in anticipation of rapid urban renewal in Singapore. They built the Poh Tiong Keng 普忠宫 (Pu Zhong Gong) in Toa Payoh (across the road from where the current temple is). Alas, the ground was too low and during rainy seasons, the surrounding would be flooded. 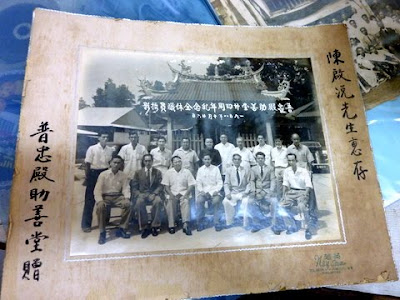 Hence another move was inevitable. The new temple, now called Poh Tiong Beo普忠庙 , was built at the current place. In the 90s, urban renewal had caught up at Nankin St. It was time to move and so the Poh Tiong Dian moved to Poh Tiong Beo.

This temple's resident Deity is one of the three officials of the Song Dynasty, Zhang Shi Jie. The three officials of the Song Dynasty - Wen Tian Xiang 文天祥, Zhang Shi Jie 張世傑, and Lu Xiu Fu  陆秀夫- were known for their righteousness and strong loyalty to the Emperor of the Song Dynasty. All three died defending the Emperor. Wen Tian Xiang was executed by the Mongols in Beijing, Zheng Shi Jie drowned fighting the Mongols - and it is said that his body was found in a village in Tong An (hence, he was the patron Deity of this village), and Lu Xiu Fu committed suicide with the young Emperor rather than being captured by the Mongols. 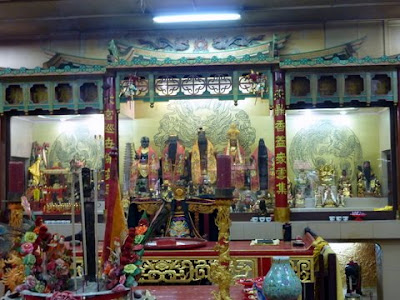 There is another temple in Singapore that is related to this temple. This temple, Shui Xian Gong at Zion Rd, worships Wen Tian Xiang. When the businessmen went to Malacca to expand their business, they wanted to invite one of the San Zhong Wang to Malacca. Using the divining blocks (Sheng Bei), they sought the three Deities. Apparently, it was Lu Xiu Fu who agreed to go to Malacca. "With the financial assistance from Poh Tiong Beo & Religion Knowledge from Shui Xian Gong" the temple was built." So today, the three temples, each housing one of the three officials, form the complete trinity.

The temple celebrates in honour of Sam Tiong Ong on 16th Day of the 9th Luna Month (9M16).