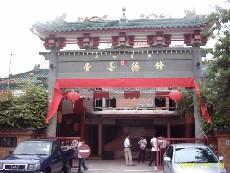 The Bukit Timah Seu Teck Sean Tong temple is located at the junction of Jurong East Ave 1 and Jurong East Street 24. It shifted there in 1986 from its former location at Jalan Seh Chuan (Bukit Timah), which it had occupied for almost a quarter of a century.

This temple is dedicated to the Teochew "Chor Soo Kong" better known as Sung Da Feng Zu Shi (Saint Ta-Fung). This deity occupies the central position on the altar in the main prayer hall. To the deity's right is the Monkey God and on his left is Jigong. There are altogether three Sung Da Feng temples in Singapore - one in Toa Payoh and the other in Bedok. And there are four in Malaysia - Pontian (Johor), Muar (Johor), Melaka and Butterworth (Penang).

This Bukit Timah Seu Teck temple is an institutional member of the Blue Cross movement. The movement started in early 1942, during the Japanese Occupation, when five Chinese "Siang Tng" ("Sean Tong") (Centre of Charity) or worshippers' groups decided to pool their monetary and manpower resources for a common goal. The five groups are: (a) Seu Teck (2) Nam Ann (3) Phoh Kiu (4) Thong Hong and (5) Thong Teck.

The common body they established is called the the Blue Cross Movement. Its mission is to collectively serve the community, without expecting any monetary reward. Among the activities of the Blue Cross movement is the establishment of free feeding centres for the needy and provision of medical centres manned by volunteers.

To that end,the Bukit Timah Seu Teck Sean Tong offers free medical consultation, including acupuncture treatment and even has its in-house dispensary. Dates and times of the "clinic's" operational hours are: Tuesday, Thursday and Saturday from 7 pm to 9 pm or thereabouts. This free clinic is currently housed in an annexe near to the main temple building. By April 2006, it will move to a new 3-storey building, next to the main temple building.

There is no record from which we can trace the native own saint Ta-Fung of Sung Dynasty. He first appeared in O-Ping Li west of Min District part of which was separated by deep broad and rapid river. Many travellers had lost their lives when they met with a storm.

Saint Ta-Fung vowed that he would have a bridge of granite built for the convenience of the public. Those who heard his pledge laughed at him. He paid no heed to the ridicule but started the fund raising campaign. He also made survey of the area, sounding of the water and estimated the number of carpenters and masons to be employed. No one knew what he was trying to do. He soon disappeared.

In the year Kuei Bao of the reign of Suan-Ho (1123 AD) Saint Ta-Fung returned all the money to the donors which was much surprise. Five years later Saint Ta-Fung came by boat. He brought with him this time food, timber, granite, labourer and all that was necessary for the construction of the bridge which was completed exactly in 1 year's time. The span of thebridge had 19 arches. There were 2 other arches at the end of the bridge. Nearest to the 2 banks of the river were not finished in the same year Saint Ta-Fung died and Mr Tsai Kung-Yuan a native of the district completed them. It is said that during the construction of the bridge, Saint Ta-Fung sent a memorial to the City God and the result the tide stopped coming for 7 days. It is indeed miraculous. A temple in his honour was set up in the name of Pao Te, repayment of kindness.

RSSMagic said...
This comment has been removed by a blog administrator.
8:20 PM

Great to know that there is such a temple around in Jurong East after my residence here for 9 years already. I'll visit this temple soon.