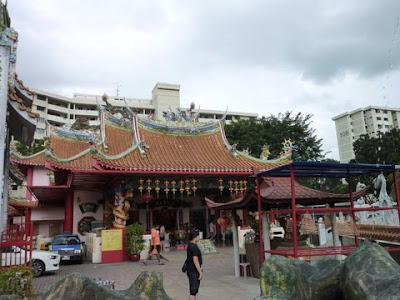 From the plaque on the wall of the temple, is the history of Ang Chee Sia Ong Temple

Wang Kang was a high-ranking official of the kingdom of Shu Han - one of the three kingdoms in Chinese history. Being an upright and honest official, he was deeply respected by the people. He was given the title of An Ji Shen Wang (Ang Chee Sia Ong) after his death and a temple was built to honour him. Green snakes were often spotted at the temple and when the people of Chao Shan saw one at the battlefield, they would invariably emerge victorious. They believed that the green snake was the transformation of Ang Chee Sia Ong, whose spirit provided a protection of them against disasters. Hence Ang Chee Sia Ong was also known as Sacred Lord Green Dragon (Qing Long Shen Wang) and the temple, Qing Long Gu Miao.

In the Ming dynasty, there was a drought in Yong Chang, Yunnan province. The official then, Xie Shaochang took it upon himself to open the official granary before writing to the imperial court. Obtaining approval for ration from the emperor would mean a delay, leading to starvation and death for the residents. However, he was sentenced to death for this. As such, he was hung up in a tree in a mountain for three days and would be released if, by a miracle, he survived. One day, a figure appeared in the sky and spread a large black cloth which subsequently turned into a huge patch of dark cloud, shielding Xie from sun and wind. Xie survived and was released. Praying at the An Ji Shen Wang Temple in gratitude, he realized that Wang Kang’s statue bore a resemblance to his mysterious Savior. After that, he started burning incense and praying to the god day and night. Also, he brought the statue of An Ji Shen Wang along with him upon his return to Chaozhou and built a temple in his honour. The number of worshippers grew and they moved the statue to a bigger temple at the south bank of Hanjiang later and named it Qing Long Gu Miao.

In the Qing dynasty, Emperor Kang Xi sent his younger brother to Chaozhou, to build battleships for the conquest of Taiwan Island. Seeking divine prediction from the lord in the Qing Long Gu Miao, the divine sticks turned up negative for three times, hinting at failure. Indeed, the Qing court suffered great losses later on. When questioned, the brother revealed his encounter at the temple, upon which the emperor sensed a great mystical power of prediction of An Ji Shen Wang. In respect of him, Kang Xi ordered an Inspiration Tablet made and placed inside the temple to honour the lord. From then on the fame of the temple spread even wider and its story became known to one and all.

More details on the history of the temple could be read from its website. 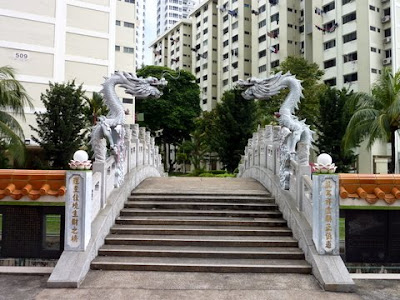 There is a bridge that links the temple across a canal to the housing estate. If you step on the right step, the two dragons will give you a shower of blessings. There is also a dragon sprouting out water that you could bring home with the bottles provided in the temple.