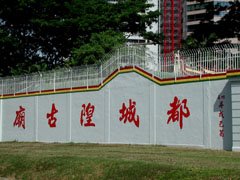 Seng Wong Beo, as is more popularly known to the older generations in Singapore, was a landmark in Tanjong Pagar. It is still a landmark, an ancient structure dwarfed by the huge and tall concrete skyscrapers. This year, 2006, it celebrates its 101st year of existence.

Painted with both strokes of the Chinese brush style on the exposed outside wall of this temple is Du Cheng Huang Gu Miao 都城隍古庙. Cheng Huang is translated as City God in English. 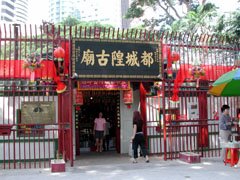 This temple has an interesting history. It was founded by a Buddhist monk although the temple is more Taoist in nature. It can be considered as a syncretic temple, which is quite common in the Chinese temples in the early days of Singapore.

This temple is also well known as the temple where ghost-marriages are arranged. According to sources, sometimes, a family member of a deceased relative (single who died young) might have a dream about being requested to arrange a marriage for the deceased. Chances are it would be the mother who dreams about it. In about the same time, another family might have a similar request. This temple does "match-making" too, matching them according to the descriptions. This is but one aspects. The SPI website has a more detailed report on this.

Below is an interesting account which was posted on a signage outside the temple, explaining on the history of the temple. 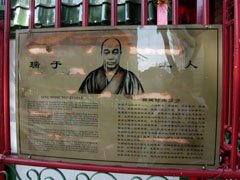 The temple was founded by Reverent Swee Oi from China. The Reverend whose family name was Huang, was educated and well versed in poetry. He was an imperial scholar during the Qing dynasty. However his keen interest in Buddhism led to his decision to become a monk. He was ordained in Fuzhou Quanzhou.

The temple worships the City God. According to Chinese beliefs, the City God guards the city from evil. Devotees come to the temple to pray for the country's peace and prosperity, for the triumph over evil and for the good health of all. The City God rewards good deeds and punishes the evil ones. He also has the responsibility to guide souls of the dead to the underworld. His temple has ben and continues to be a place of solace for its many devotees.
Posted by chinatownboy at 7/16/2006 04:36:00 PM

Any tips for male/ female on prayer in this temple? I'm quite confused when some say male should pray anti clockwise before reching back to the front again while for female would follow clockwise turn while praying.

I was told that generally in all temples, some people might use the main joss urn in the outer hall, just after entering the main door, to "change their luck", the female doing the anti-clockwise and the male, clockwise. In some cases, they might choose to walk into the temple on the left or right of the urn to change their luck.


City God worship had been observed since Medieval Chinese history when towns and cities and dykes were built. This was more so in the later Song dynasty with development in astral naval shipping , water astronomal clocks and engineering and the agricultural reforms of Minister Wang An shi . Then there is the strange story of Dee gong Ann or strange cases of Famous Tang dynasty Dee gong or Judge dee who sought an oracle from the city God temple .

As a Chinese legalist scholar , I know that the city God is one of the Chinese legalist gods besides Guan gong and Shang di the astral great bear for militant power because Chinese legalism is about determining the rule of law and the preveledges of the political elite in power and control . What I love about the city god lore is that the city god as a link to the astral world is has a police jurisdictive and legal authority to watch over the people and report to the Jade emperor by deceiding on rewards and punishment and human welfare and protection of the population. So this necessitates the making and offering of all sorts of scarifical food offerings and exotic festival auspicious pastries to appease the heavens for luck and grace . It is also a very good opportunity to eat some exotic tasty treats .
China since its civilisation always had been confronted with problems in relation to power and population control and industrialisation and this problem has only become more exacabated in our post modern times with numerous human rights issues and consumerism on the rise . Singapore is only but a micro minizarise world dominated by a semi-behanine benevolent autocacry of a one party dominated mad rat race society . It was under such prevalent circumstances where our mainland forebears resorted to their own devices of city God worship to voice for some justice and peace and protection from upstairs ! http://chinesetemples.blogspot.com.au/2006/07/23-seng-wong-beo.html

In the older generation, there used to be the Mahzu festival in which devotees to Mahzu in Penang and Singapore would burn joss sticks and make paper boats in honour of Mahzu and for auspicailty. This custom was later banned by the Singapore government as it cogged up the water ways and caused water pollution. It is today replaced by elaborately huge paper water floats for its river processions .http://www.asiatraveltips.com/news10/116-SingaporeRiverFestival.shtml

Chinese Temples: 23. Seng Wong Beo 都城隍古庙
chinesetemples.blogspot.com
Any tips for male/ female on prayer in this temple? I'm quite confused when some say male should pray anti clockwise before reching back to the