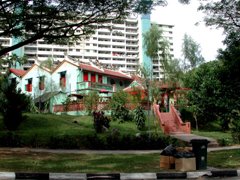 For more than 40 years, I passed this temple, first by walking up the path to Mt Faber, and later driving past, but I did not get to visit the temple until December 2005. From a temple with a great fengshui with a hill behind with lots of trees and nothing else, and looking down the valley or foothill with the attap houses, this temple is now dwarfed by the surrounding HDB flats.

There are actually two temples in this complex. This one at the lower level, is the Wan Shou Shan Kun Cheng Tang 万寿山堃成堂. Both temples are dedicated to the 18-Hand Guan Yin, with many other Deities as well. 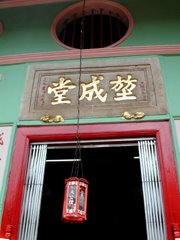 From the main signage above the door, it was crafted in the year Guang Xu 光绪 6 year, that is the 6th year of the reign of Emperor Guangxu (Kuang Hsu). This penultimate Qing emperor ruled China from 1875 to 1908 - hence that would make the date of establishment of this temple, 1881. This would make the temple about 125 years old. The structure looked neo-modern with tiles of the Peranakan age.

An old lady was walking around keeping the place clean. A little bent, she was a very friendly lady, offering explanations here and there. So, I took the opportunity to ask about the temple. I asked her how long she had stayed in this temple. She said that she was there since the 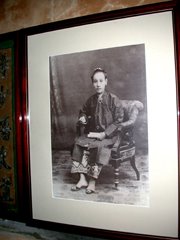 age of 5 when her suhu (sifu - master) brought her there. She said that she's 84 years old and her name is Chua Peng Nyet. The suhu, whom she showed us from the picture, was a Peranakan Nyonya from Penang, Chew Nee Lock, who passed away in 1970.

She also showed us a picture of her suhu (sifu)'s suhu,Teh Chit Yee, a Teochew lady . The picture showed a more traditional Chinese picture, but she could well be another Peranakan.

The temple is very old and there are many artifacts of heritage value. I hope that they will be preserved and not thrown away unknowingly. (^^) There was a bell which indicated that it was made in 1908. The boards showing the donors were so old with age, or covered with soot that I could not make out the names. Interestingly, the lady told us that in November, a devotee actually donated a kind of chandelier to the temple! 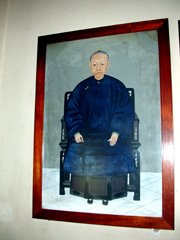 There were many old statues that were kept in the temple and they were still being worshipped. From what I understood from the lady, some were abandoned and some were left behind for safekeeping by devotees whom the temple knew. Apparently, when a house is under renovation, the temple is a good place to place the statues of the Deities.

The lady kept asking if we would like to have tea. Ah, such 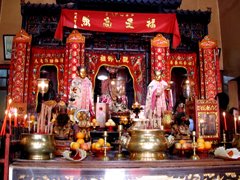 hospitality is hard to find in temples these days. In the old days, or my younger days, when I used to walk the entire length of Mt. Faber, I would always stop by the temples. Why? They serve tea to the "weary travellers". (^^)
Posted by chinatownboy at 2/11/2006 05:33:00 PM

Don't mind, can you give me the address? I've googled for it and checked the street directory but I can't seem to find it. I'll like to drop by, it looks very quaint. Thanks so much for your great blog!

Hi!
It is at the junction of Telok Blangah Dr and Henderson Rd.

It is one of its kind, in architecture and ambience.

Hi, do you know if they have tai yang gong and tai yin niang in the temple?