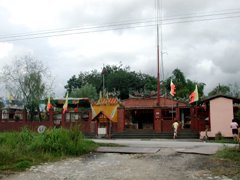 This present Jalan Kayu Ban Kok Sua Chong Yee Beo [Wan Guo Shan Zhong Yi Miao] 万国山忠义庙, has been at this place since 1964. The main Deity of this temple is Guan Gong, known as Hup Tian Dai Deh [Xie Tian Da Di 协天大帝]. The Guan Di statue was actually from the Guan Di temple in Dong Shan 东山, Fujian. This temple was said to be the springboard for the Guan Di temples in Taiwan, and possibly South East Asia.

After the statue was 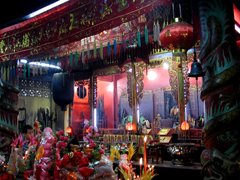 brought from Dong Shan, it was placed in the Guan Di temple in Paya Lebar, called Chai Shan 柴山. In the 1950s, a group of elders started building a temple, an attap hut, in Jalan Kayu. It seems that this place was called Man Kok Sua [Wan Guo Shan 万国山] In 1962, efforts to rebuild the temple were made and it was built in 1964.

On the land where the attap hut temple was built, it was said that during the old days, there was an angmo, who probably owned this land, and he was ill. He consulted the Guan Di through the medium and was cured. In return, he gave the land for them to build the temple. 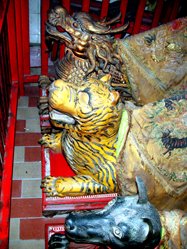 In 1984, a new executive committee started recruiting members for the temple, and each year in the Lunar Calendar of 3rd month and 6th month, the temple celebrates the birthday of Xie Tian Da Di 协天大帝 and Xuan Tian Shang Di 玄天上帝 and other Gods

In the old days, the temple was surrounded by farmlands and villages. Now, most of these are gone. But the former residents still come back to the temple, especially during the festive days.

The temple is now raising funds, expecting to move to a new site in the near future. It is now one of the few remaining kampung (village) temples with the timeless village atmosphere.

thank you so much for such a great blog!
I was searching high and low and asking people about consultations.. and never would I have thought that I could get the information right from your blog.
THank you very very much.

Hi Jx,
Glad that you find what you were looking for. Please call to confirm, just in case. (^^)

I just went to have a look at the Chong Yee Temple and the caretaker (Mr Lin) said when the land lease expires, they will be moving to a new plot by the main road (Jalan Kayu) which will be shared with the former Thai Buddhist temple (from Pulau Ubin, which had to shift when the nearby quarry was scheduled to be reopened for mining) and a Bao Gong temple.

Kindly advise where address of the temple like to pay a visit, thank you.

May i know where is the new temple located?

May i know where is the new temple located?

The new temple is at Jln Kayu near to the junction of SengKang West. I am not sure of the exact address, but if you are at that area, you will see it. There is another temple building behind it.

Hi chinatownboy,
i have took ur 萬國山忠義廟 info and post it in facebook.. Juz to info u abt that u oso can check it on facebook 萬國山忠義廟. the Grand opening is on this coming friday (11/11/2011).

the new address of the temple is at 72 sengkang west avenue, singapore 797652.

May I ask which god we pray for good business? Thk u

hi, do you know where i can buy a painiting of the Guan Di in a sitting position?

Pls email me at thoomt@gmail.com Tks

How I became a Singaporean Chinese Bao gong ghost dreamer
I am actually a Bao Gong ghost dreamer and looking for friends to share my knowledge so I start by telling the history of Chinese bai shen primitive Daoist Chinese culture that evolved from early times to late Ming period that has shaped the facets of our overseas Chinese heritage :


2. The need to adjust to settlement of river life in the yellow river delta Hung he basin and Yang zi or the great ocean created a great need for a balanced ecology with mountains, river, land, earth and sky which led to the creation of Shang di or Di gong in Hokkien which is the north pole astral god which derived from the balance of water and fire and alchemy to balance the cosmos to achieve universal rule, peach and harmony


3. Astral projections and ghost dreaming or ghost encounters were mixed with river worship and dragon emperor worship for river and flood protection and preservation of human welfare and happiness.

3a. Early worship of emperor sage kings of great Yu, Yao, shun and Yellow emperor known as the great auspicious five or 5 Augustus ones, demi gods and goddess such as Wang mu or the western mother, Nui wau, Pan gu and jiu tian xuan nui or jade fairy maiden for horticulture, agriculture and Chinese internal medicine originated from the Chinese autochonotic beliefs from their migration from Mesopotamia into the China plains and Asian steppes during the Akkadian great King Sargonic age


3b. Kingship of emperor worship and shamanic priest craft and dragon worship originated in the Shang and Zhou dynasty which were integrated into other literal works such as the Confucius teachings and the book of Songs, Spring Autumn annals and warring sates literature such as the drowning of Qu Yuan in the river which was tied in with dragon king worship and the boat races


3c. the school of legalism and school of military warfare of the warring states, patriotism and loyalty and chivalry poured into the Three kingdom period that created the Gung gong veneration and the later Song dynasty Water Margin and Bao gong Taiping era stories .

5. Taiwanese and Hokkien taoist culture consequently elevated Bao gong into a river dragon god for human welfare, protection and happiness as well as the development of the Chinese legal system to reinforce justice and peace along side river worship of Shang di and mah zhu
6. Gaung gong and Shang di were elevated into important local gods during the early Ming dynasty of Emperor Yung le who was a follower of the Legalistic Taoist school of thought when he founded Zhen yi Taoism or a purer school of Taoism or legalistic righteous administration to reinforce his autocratic rule. Emperor Yong le was opposed to both Buddhism and Confucianism and heavily supressed and outlawed them because:
a... Tibetan Buddhism and tantric practises was made popular by the Yuan dynasty Mongolian rule over China
b. Confucianism which is based on benevolent rule undermined his autocracy and a great threat to him. Emperor Yong le imprisoned and exiled all his Confucian scholar ministers of his day and introduced Shang di as THE PRINCIPAL GOD TO BE WORSHIPPED absolute divinity which was very useful in according to the building of the forbidden city according to the north pole orientation of the imperial palace cosmology and elevated Guan gong and the city or town guardian into gods for national peace and prosperity.
So this is how and why Taiwanese and Hokkiens as Malaysians and Singaporean Overseas Chinese have received the Chinese Ming dynasty Zhen yi Taoist heritage which developed from Beijing and spreaded into Suzhou and Hangzhou then into Fukien and Canton and subsequently became transplanted across Nanyang and into Singapore . The same is true of the Baba Peranakan culture of the early 20th century as wriiten by Felix Chia of the Babas .
So this is how I became a very eccentric unorthodox Confucius Legalist Taoist Chinese failed scholar of Ling Meng Zhu Bao gong astral projections and ghost dreaming. Please be agreeable to be friends to help share, promote and preserve the knowledge and legacy.

7. Taiwan TV hollowood studio first produced the Bao gong chinese drama series which had a very psychomatic euphoric effect on its citizens who love Chinese dramatic films secularly and spirtually alike that it grew into a local pulp ficiton holly wood Taiwan stlye cult film . One such person was a Taiwanese business man who had a dream of a Black figure of Bao gong in certain county in Taiwan which forewarned him of an impending flood so he put away some money to rasie funds and built a local temple to Bao gong and the river goddess Mahzhu to prevent flooding . The flooding did actually occur and prayers at the temple helped to cause the flood to subside . Consequently the locals prayed faithfully atthe temple since then .
8. This popular Taiwanese Baogong cult film spreaded into Singapore and was reprodueced by the Singaapore SBC afternoon matinee . From my early childhood, I eacthed this sereies so dilligently glued on it with all its intrigging muder mysterioyus queer stories .

9.I became so fascianted by Bao gong since then it and it is only till recent in my overeseas chinese retrospection mand introspection that I researched into its origins . Incorporating it into my Daoyin Chinese yoga Qigong astral projection excercises led to very real and strange and mysterious expreinces that I post.

10. According to Margret O'suvillian's book on Singapore cottahe industries in high rise Singapore, the section on Ship and things wrote that Singapore's Shipping hsitory predates to the Srivijaya empire of the 5th century with tis connection to the middle east and the Asia Pacific with ships on the maritine trade route berthing in Singapore . Its boat buiders asociation from the good old days built boats out of fiber glass in Jalan kayu and formed themselves into the boat builders assaocation. some worshipped Mahzhu empress of heaven whuile orhers Di gong or the hokkien name for shang di . Surfing the net to rediscovr this episode of Singapore's shipping industry history brought me to you guys here online .

The next round, I write toy mou guys how I rediscovered my Foochow Lim family roots as a result of my interest in GaunGong's big boradsword and how it led to to discover Singapore's oil and shipping industry which has shaped my destiny as an investor for oil and shipping on the net.

I think you guys should read this website :
http://www.chinatownology.com/guan_gong_culture.html