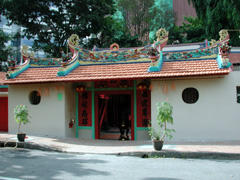 Fu De Ci (more commonly known as Fu Tat Chi, probably a Hakka word) Wang Hai (facing the sea) Da Bo Gong (more popularly known as Tua Pek Kong in Hokkien) is one of the oldest, if not the oldest temple in Singapore. Situated by the sea (hence facing the sea), this temple was first built in 1819. It was rebuilt in 1844 and since then had undergone some renovations.

The main deity of this temple is the Da Bo Gong, also known as Tua Pek Kong. There are also other deities in this temple. This is probably one of the oldest and few Hakka temples.