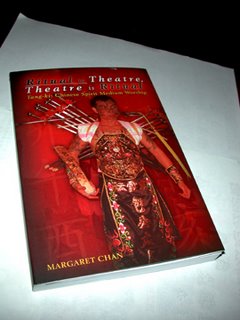 This book: Ritual is Theatre, Theatre is Ritual: Tang-ki: Chinese Spirit Medium Worship by Margaret Chan is probably the first English edition book on Tang-ki worship in modern day Singapore. This book is also a Tangki Worship 101 for many who might have witnessed numerous such events in Singapore and yet have no idea on what they were all about.

This book is both for those "inside" and those "outside". Many Singaporeans probably have a hard time explaining to their foreign friends about this interesting and colourship worship. Tang-ki worship is also very much an oral tradition, where knowledge is passed down from grandparents to grandchildren, and much detailed information has been lost. So, this book is certainly timely, especially for present day kids and adults alike who are asking to understand and know more about what their grandparents and parents have been and are worshipping.

Certainly a good guide book for one to read before and after attending a temple event where there are tang-kis (spirit mediums). This book is now available in all major bookstores in Singapore. 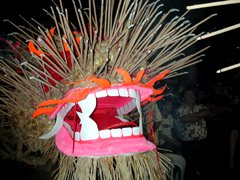 The Fire Dragon 火龙 is another form of the more commonly seen and known Dragon, which is usually made of cloth material. The Fire Dragon (Huo Long) is made from straws from the padi (also known as Straw Dragon or Tau Chao Long 槄草龙). In Singapore, it is said that only the Man San Fu Tat Chi 万山福德祠 (or Wan Shan Fu De Ci in Mandarin) in the Sar Kong (Sha Guang 沙冈) village - which is now just recognised as Sims Drive - has this Fire Dragon as part of its traditional temple event. 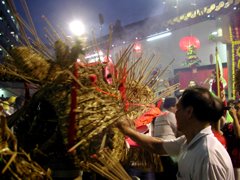 It is in fact quite rare to see such a dragon and the performance with this dragon. So, it was fortunate for me to be able to witness this interesting event. I think we can say that this is a Cantonese tradition. This year, on the 2nd of 2nd Lunar Month, the temple celebrates the birthday of Tu Di Ye Ye with this Fire Dragon, 6 lions and a three-day Cantonese Opera from Hongkong.

Some 3 months before this date, the only expert in Singapore started making the Fire Dragon with padi straws imported from China. He had to make parts of the body hard with these straws to allow sticking of the bigger than usual joss-sticks, and flexible ones to link between sections of the body. The head and the tail are probably the more difficult ones. It is another form of art. And for the performers, this would still be slightly different compared to the normal dragon. 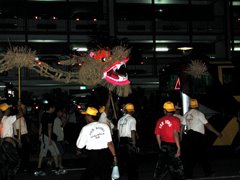 The event started with temple members and devotees lighting the big joss sticks and stick them firmly onto the head, body and tail of the dragon. The 88 metre long dragon must have had hundreds of joss sticks stuck in its body. There was also the pearl ball which is also stuck with joss sticks.

After the ceremonly of bringing the dragon to "alive" by marking the vital parts of its body by the guest of honour, the dragon came alive. Under the able hands of the leader and troupe members, it was awesome the way the dragon floated in the air, twirling and swirling in the tight courtyard. On the dim road the dragon radiated its lights from each and everyone of the joss sticks stuck on it and the smoke gave an impression of the dragon cruising amongst the clouds. The occasional rubbing of the body gave rise to "sparks" adding on to the sparkles of the dragon. 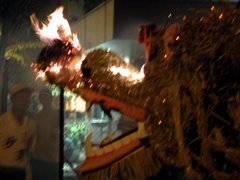 After a walk along the "kampung" (village), the dragon came back to the temple and after paying its final respect to the Deities, was put to rest outside the temple. Here, they waited and let the joss sticks bring flame to the dragon, sending it off to the heavens with all the ills posted by the devotees. Indeed, over half an hour or so, the dragon was engulfed with flames and to the cheers of "Huat ah, huat ah", the smokes went up as the ashes fell down. An event that not many Singaporeans are even aware of. (^^)
Posted by chinatownboy at 3/04/2006 10:01:00 PM 4 comments: Links to this post